You are the owner of this article.
Edit Article Add New Article
News
Sports
About us
Contact us 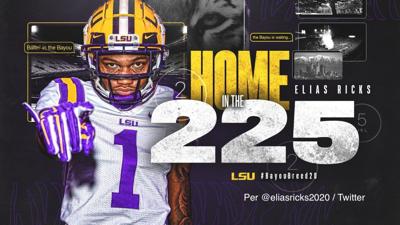 Early National signing day is over, and LSU Football recruited valuable players, such as five-star recruit Arik Gilbert, who is the highest-rated TE recruit on 247sports history.

Coach Orgeron is known for recruiting players all over the country and clearly showed that by securing 14 out-of-state commits, including the No. 1 player in the state of Florida.

247sports has IMG Academy Elias Ricks as an NFL caliber player. Ricks will use his 6-2 frame as he and Stingley look to be lockdown corners in the 2020 season.

The Tigers are strong in recruiting defensive players. They secured Phillip Webb over his home state Georgia. The Tigers defensegained a defensive general in Antoine Sampah, from Woodbridge High School in Virginia. Sampah will bring the ability to diagnose plays and be a productive interior blitzer.

Having the Heisman trophy winner at LSU brought significant attention to QBs at LSU. The Tigers locked down two QBs. One is Louisiana native TJ Finely whose 6-6 frame uses accuracy and precision in the pocket. The other QB is Max Johnson from Watkinsville, Georgia, whose dad is former NFL player Brad Johnson.

Protecting whoever the future QB is at LSU looks very bright, as the Tigers signed three offensive line players. Two of the players, Marlon Martinez and Marcus Dumervil, come from St. Thomas Aquinas High School in Florida. Yet, again Coach O is securing not only Louisiana but also national players.

The Tigers had a solid early national signing day; however, they lost out on two strong players who gave early indications that they would sign with the Tigers. One Five-star and one four-star recruit who said that Baton Rouge was their choice ended up committing elsewhere. Rakim Jarrett from the Washington D.C. area verbally committed to LSU in April but made a signing day switch to stay near his hometown, the University of Maryland. Another wide receiver from Georgia decided to stay close to home as four-star recruit Jermaine Burton signed with the Bulldogs. The Tigers finished with 14 ESPN top 300 players and look forward to national signing day which is Feb. 5, 2020.