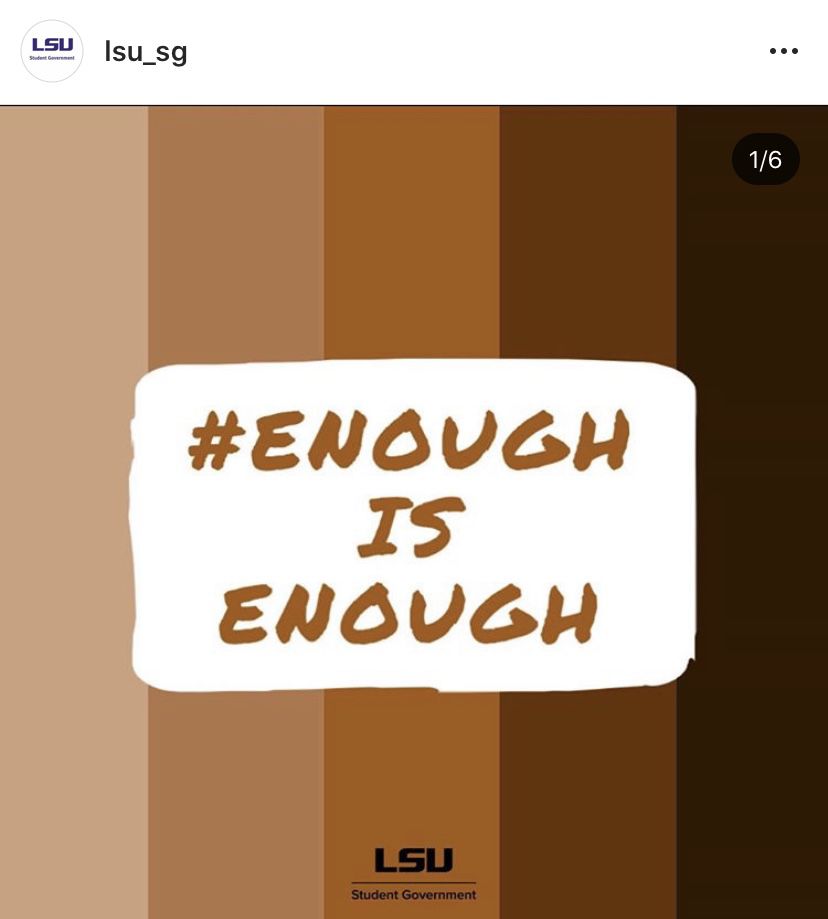 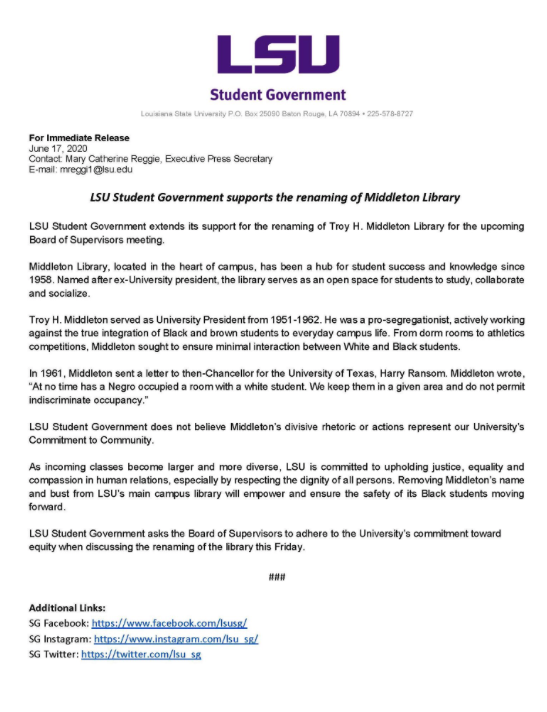 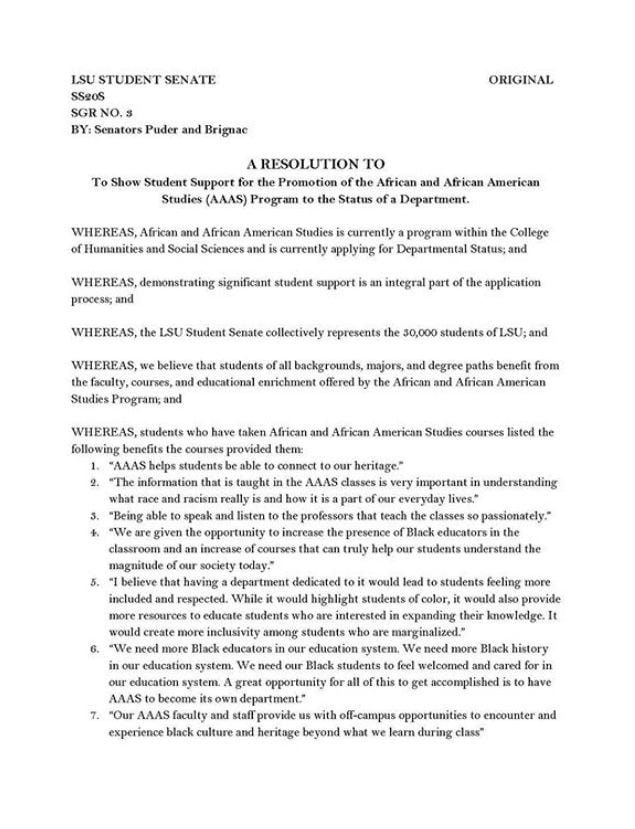 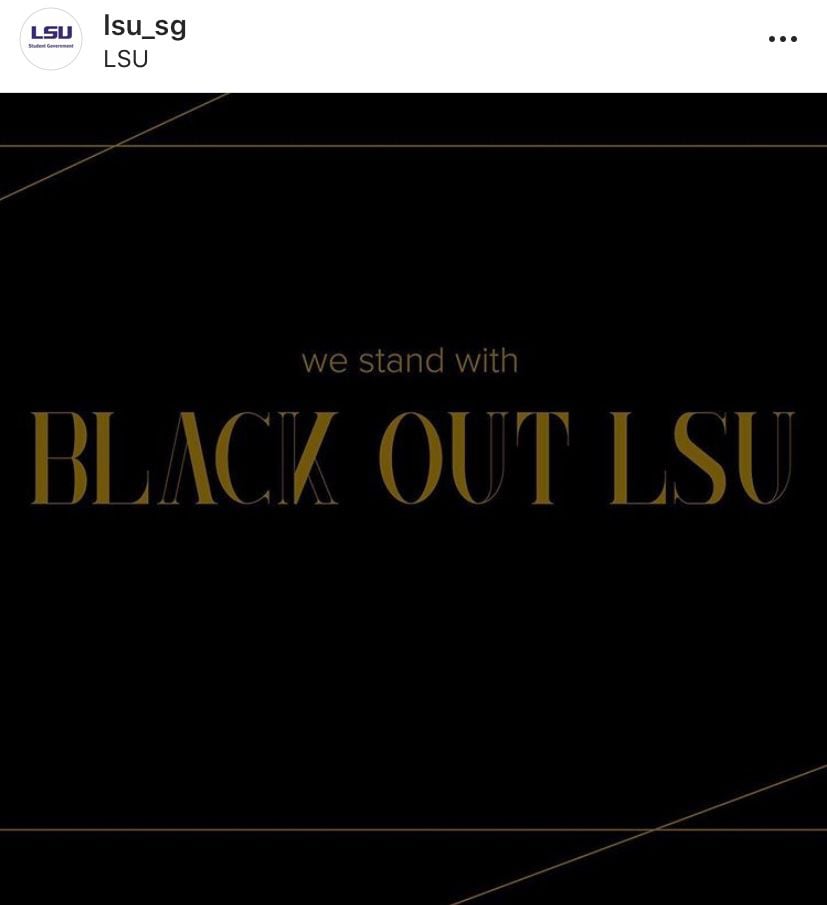 Student Government President and vice president, Stone Cox and Hannah Barrios, are planning to enforce positive changes for minority students in the midst of the Black Lives Matter Movement through policy changes and advancing initiatives in the LSU community.

While Cox and Barrios included diversity and inclusion in their campaign platforms, the student government executives strive to enact new goals and enforce planned initiatives.

"Our goals from the campaign are still there, but they have also expanded to encompass initiatives that further diversity and inclusion on campus," said Cox when discussing Student Government's support for the name change of "Middleton Library."

One goal of the organization is to adjust the LSU Student Code of Conduct by working with the Office of Diversity. They will aspire to explicitly enforce punishment for those who use offensive or discriminatory language against another student, faculty or member of the LSU community.

"Ensuring the code of conduct is making sure that students are safe and feel welcomed on campus is so important to us right now, and that's one thing that we are working on," said Barrios after referring to the controversial video on Twitter of an ex-incoming LSU student.

Cox said they have been meeting with the Student Government Black Caucus and other branch heads to discuss more changes to implement within the Student Code of Conduct that are representative of respecting all students.

Cox also said he recently signed legislation that pressed for enforcement of a Department of African and African American Studies instead of a general program.

In addition to the legislation, the Student Government Senate passed a resolution of action items to work on this year.

One of these action items included increasing accountability for the LSU Police Department. They created a survey for students to discuss their experiences with LSUPD so that they can promote a safer environment for all LSU students.

Cox and Barrios plan to ensure a more informed and inclusive environment internally within Student Government by implementing diversity training for all members. They want training to be more active than listening to a speaker by genuinely understanding the meaning of diversity and acceptance.

They also push all students, faculty and organizations to be trained in diversity by educating themselves and engaging in support of inclusivity.

"I think people are really actively starting to educate themselves a lot more after this movement and during this movement, and it's been really great to see," said Barrios.

Cox and Barrios said they realize the importance of changing the current LSU "campus climate," but they also realize the long journey of changes ahead.

"This change that is coming is good, but it is only the beginning," said Barrios. "We really want students to feel welcomed and included and that can't happen until these changes are implemented. We just have to keep moving forward."

One of the changes Cox hopes this movement will promote is an increase in minority involvement. He said he believes that, as more initiatives are enforced, there will be a "domino effect" with more minority involvement and minority students feeling that their voices are being heard.

Cox said Student Government wants to promote positive change for all student organizations to initiate changes in the LSU community and Louisiana. He said that Student Government has been very supportive of Black Out LSU and all of the leaders who are pushing for changes on campus.

Barrios said she is proud of the Black student leaders and the Black LSU community.

"They have worked so hard," said Barrios. "It has been very encouraging to support them and to learn from them."

For the future of the LSU community, Cox said he hopes to witness more minority and Black students joining Student Government and enacting change within the organization.

"Student government is there to represent all students," said Cox. "In order for that to happen, it needs to be representative of all students on campus."