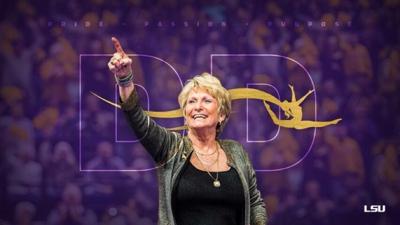 LSU Gymnastics head coach D-D Breaux announced her retirement from coaching this morning after 43 years of leading the team. This will mark the end of the longest coaching run in SEC history.

The official account for the team posted a 4 minute video in which Breaux detailed her decision to leave, her thanks to all that have helped her over the years and her continued support of LSU and the athletic department.

"I believe it is the best time to make a personal life decision," Breaux said in the video. "I've never walked away from a challenge, and I'm not doing so now. I am moving forward with this one, just in a different role."

Breaux revealed in the letter that she intends for co-head coach Jay Clark to fill her position as she steps away.

"Jay is a great recruiter, and his coaching philosophy is demanding and produces excellence," Breaux said about the new head coach.

Breaux will end her career as 2019 SEC coach of the year, four SEC Championship meet wins, 35 straight trips to the NCAA regionals, 30 NCAA championship appearances and an overall record of 816-427-7.

For the past nine months, the joke of gain… Read more here >>