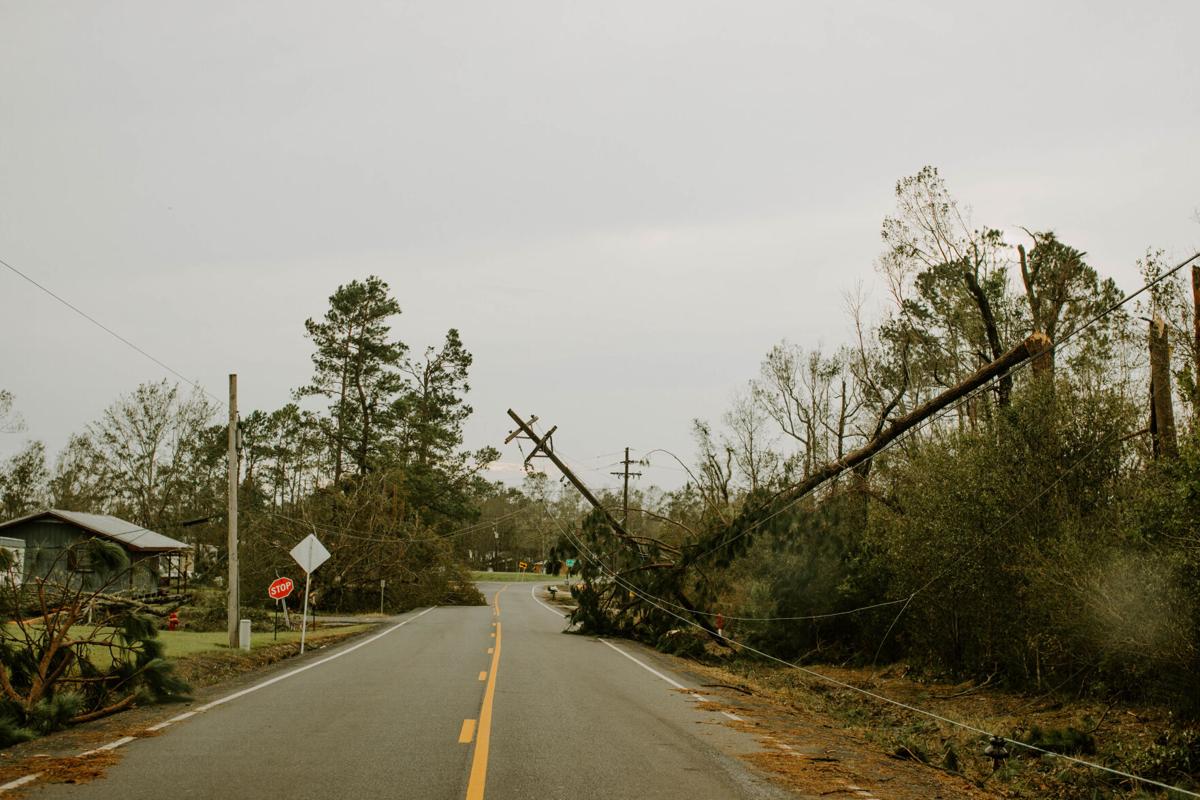 Photographer Jill Engel captured one of the many streets in Southwest Louisiana with power lines down and trees snapped in half. 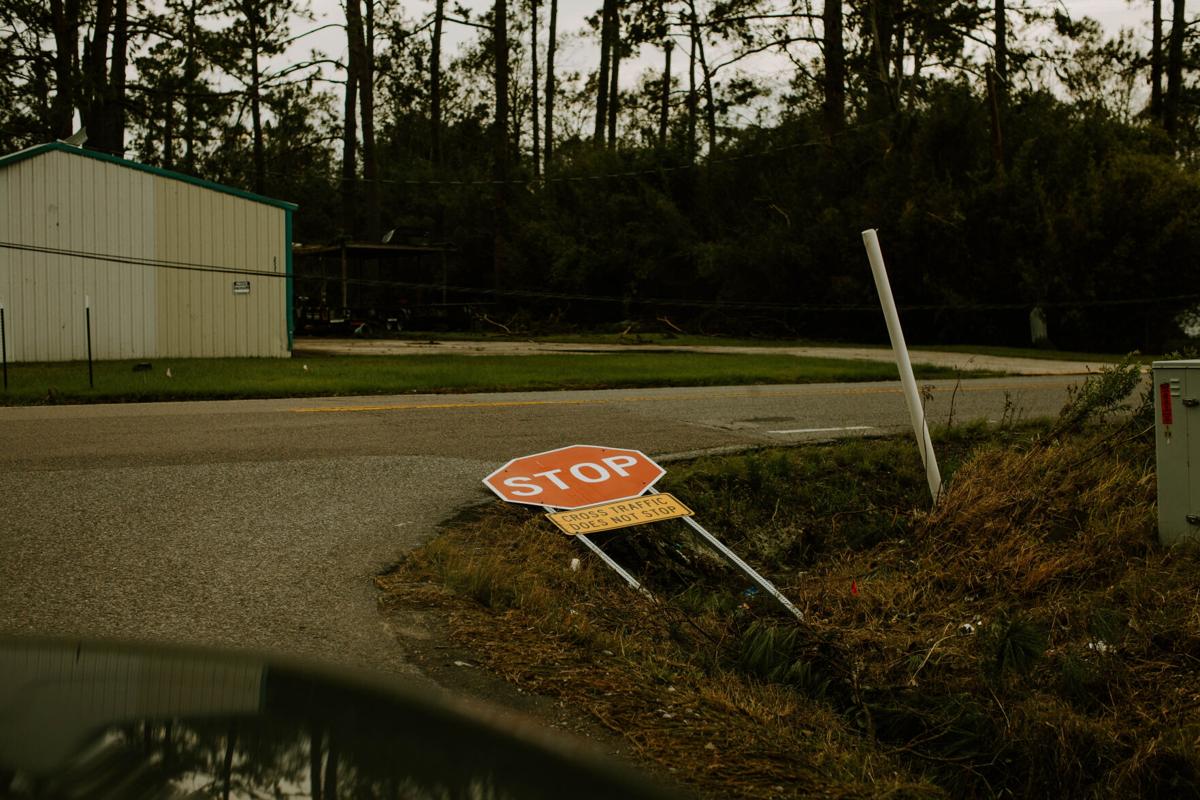 Engel captured a stop sign blown down from the hurricane. 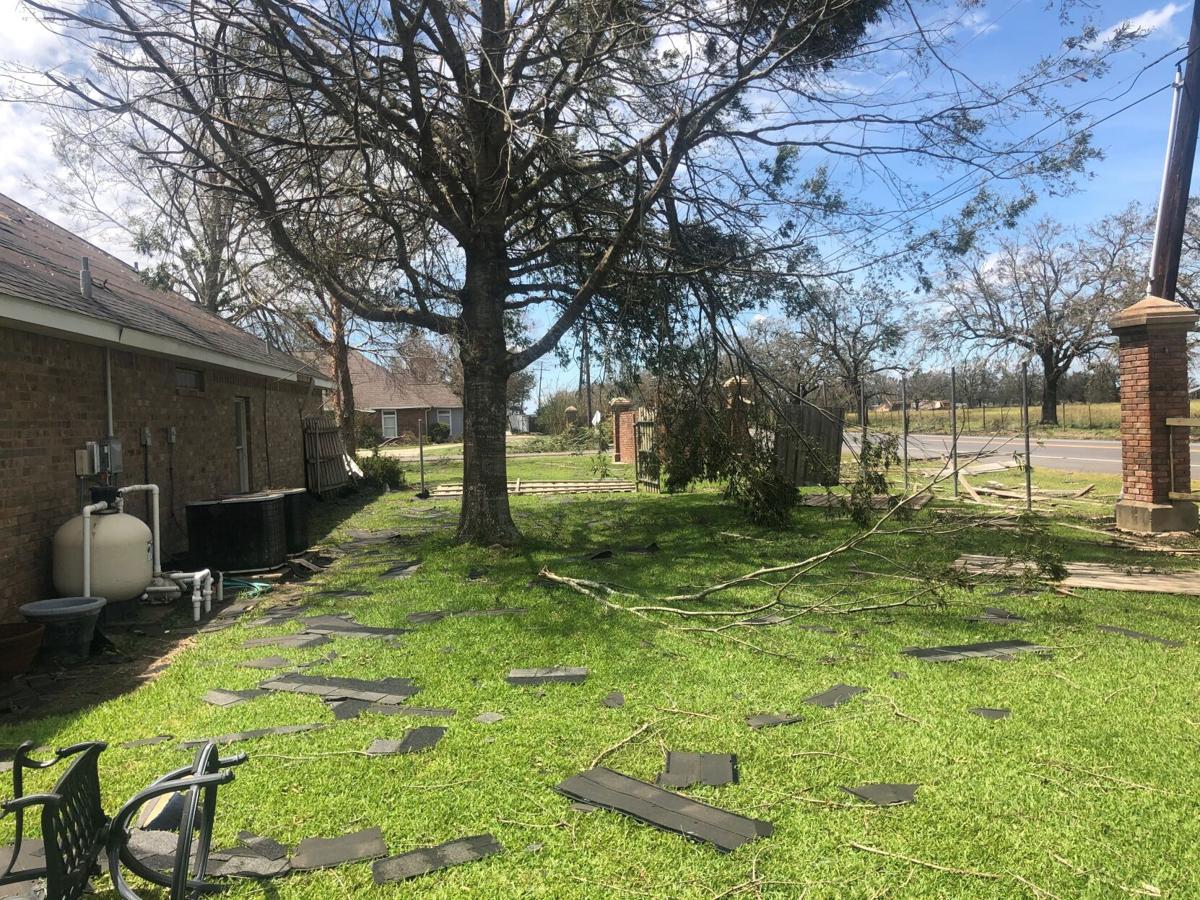 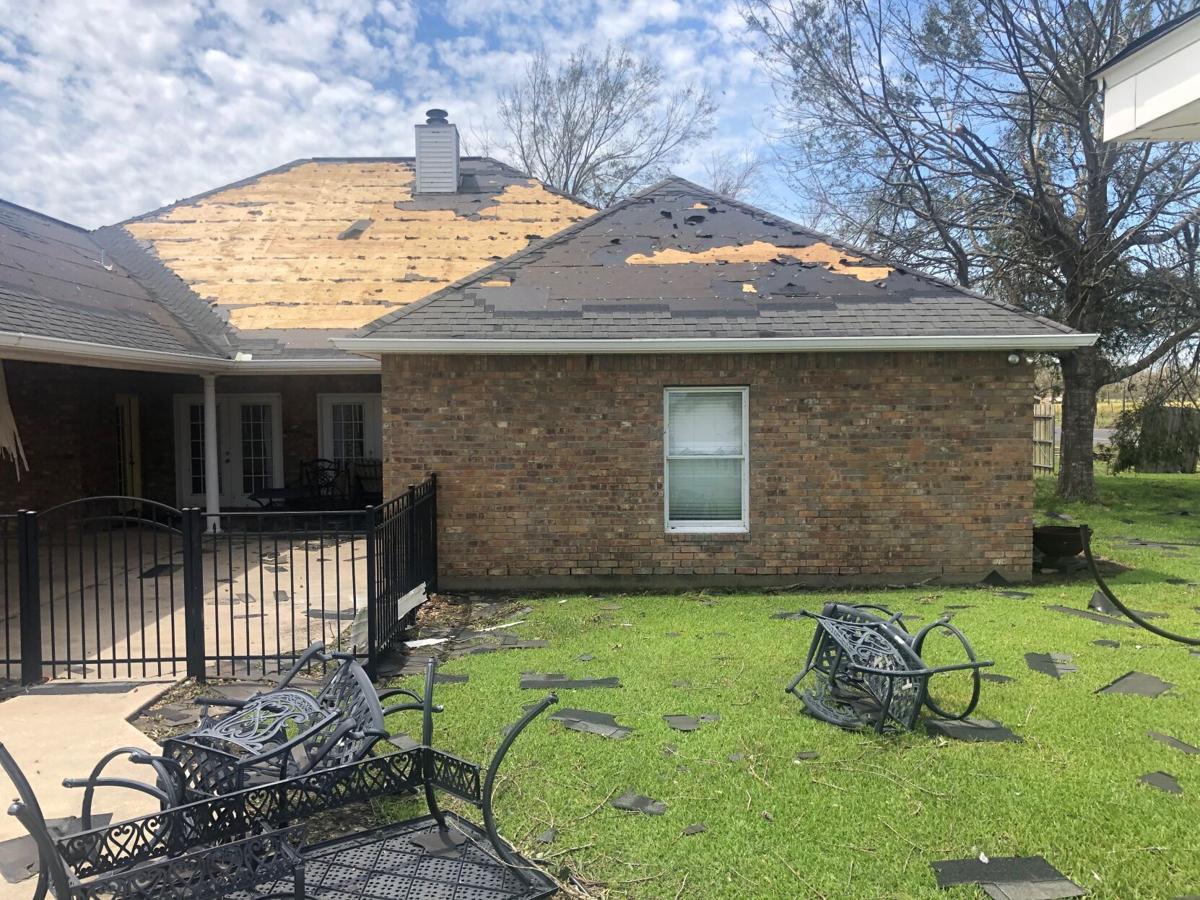 Gabby Phillips depicts damages to her home in Lake Charles. 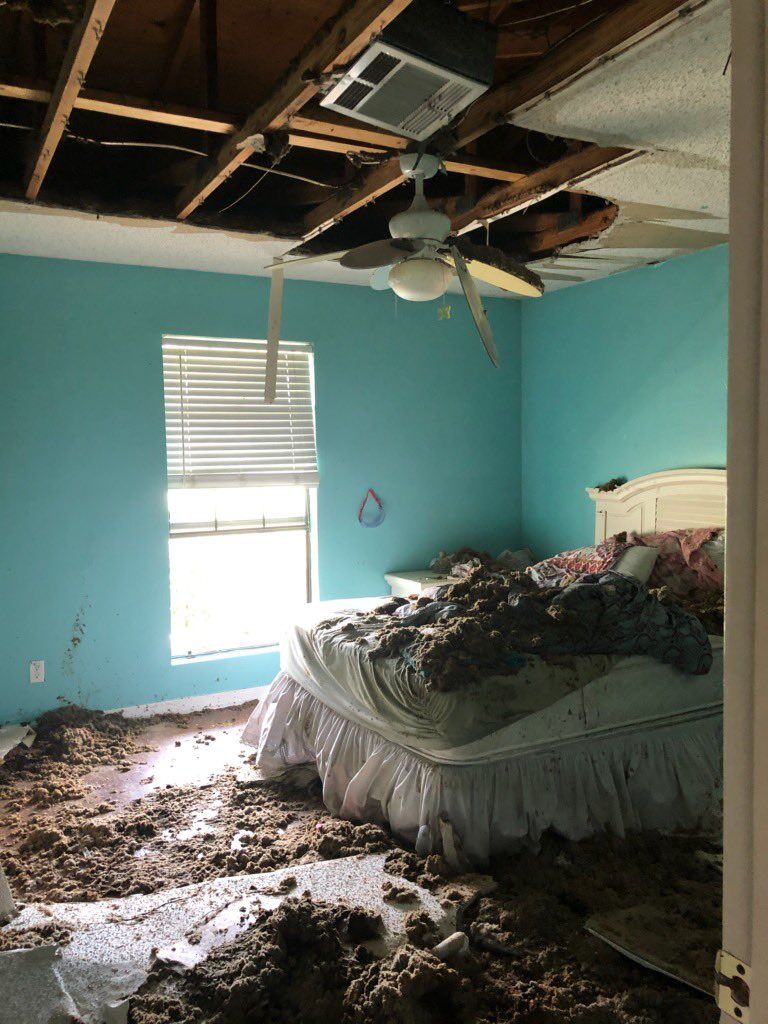 Erin Troendle captured her the damages to her bedroom following the storm. 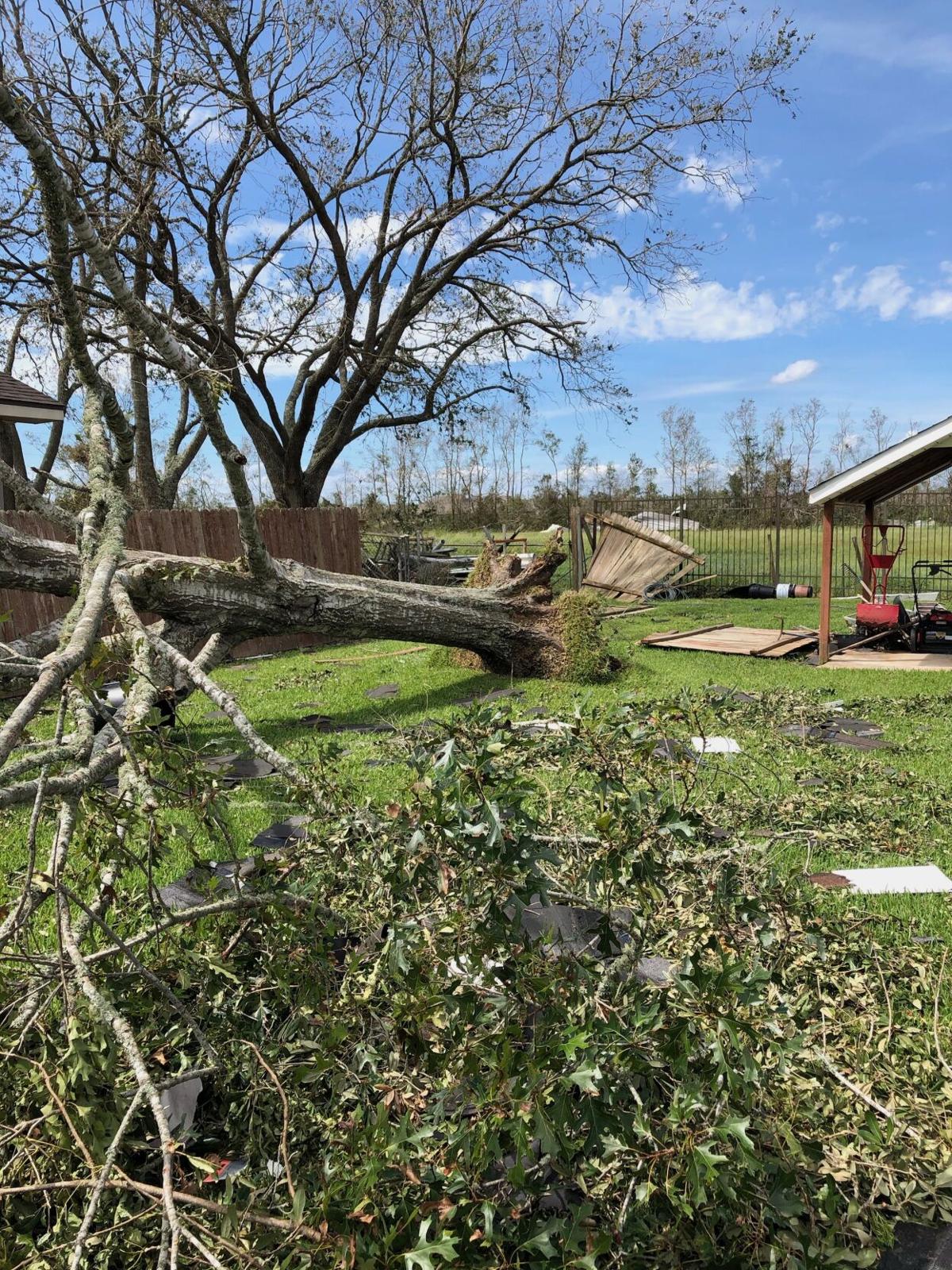 Meredith Owen photographed her backyard tree that toppled over from the heavy winds. 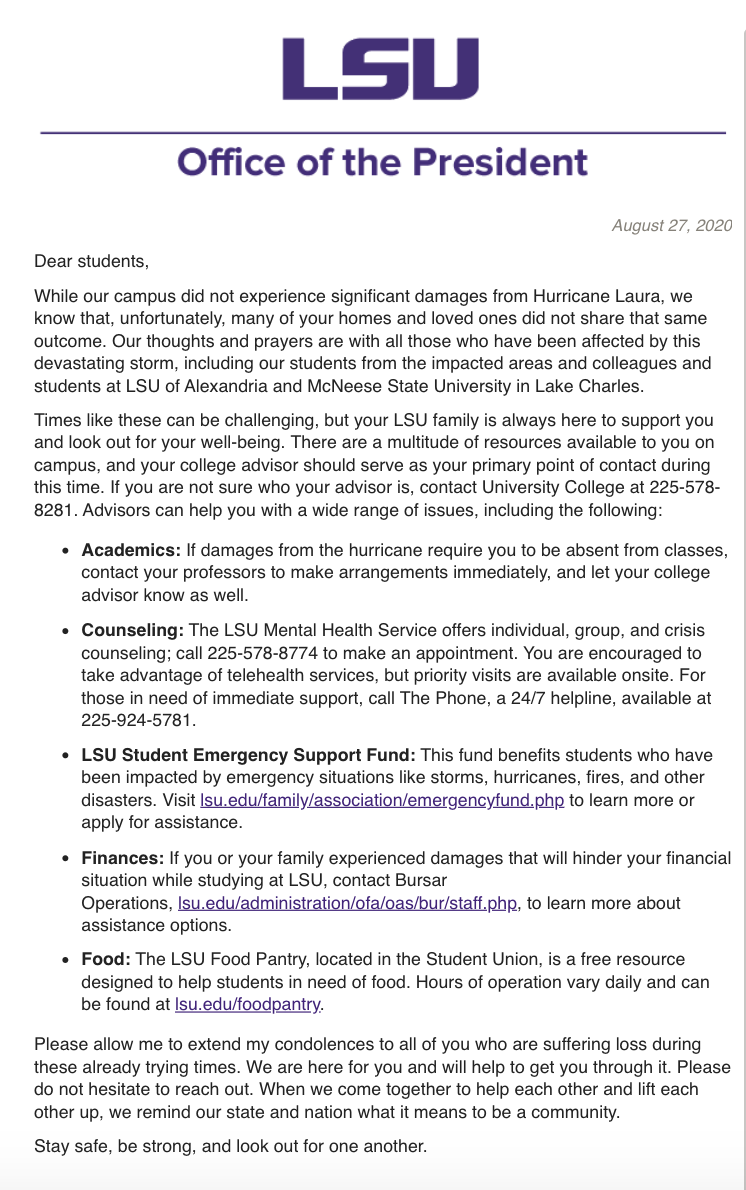 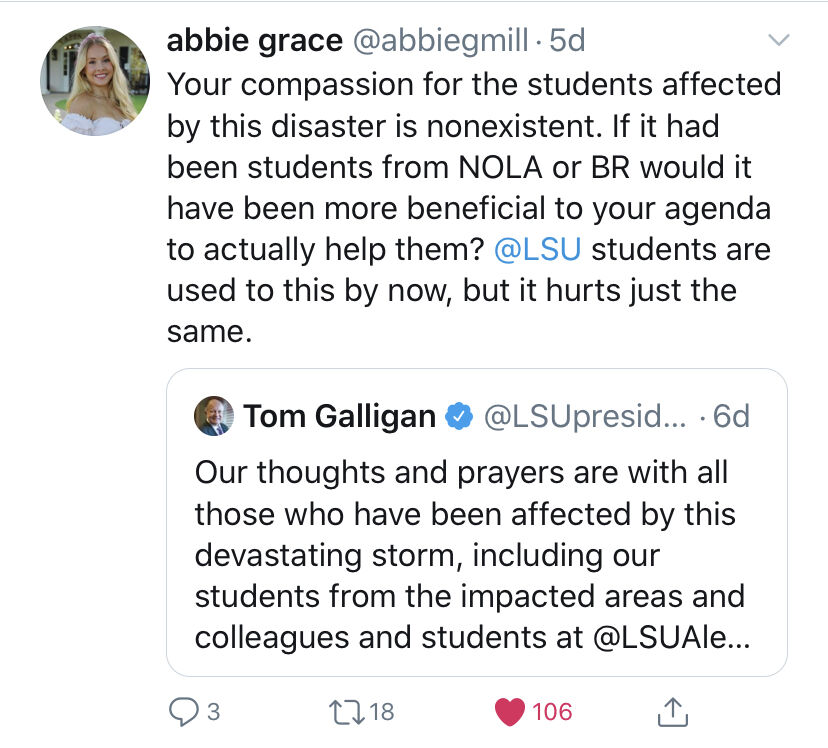 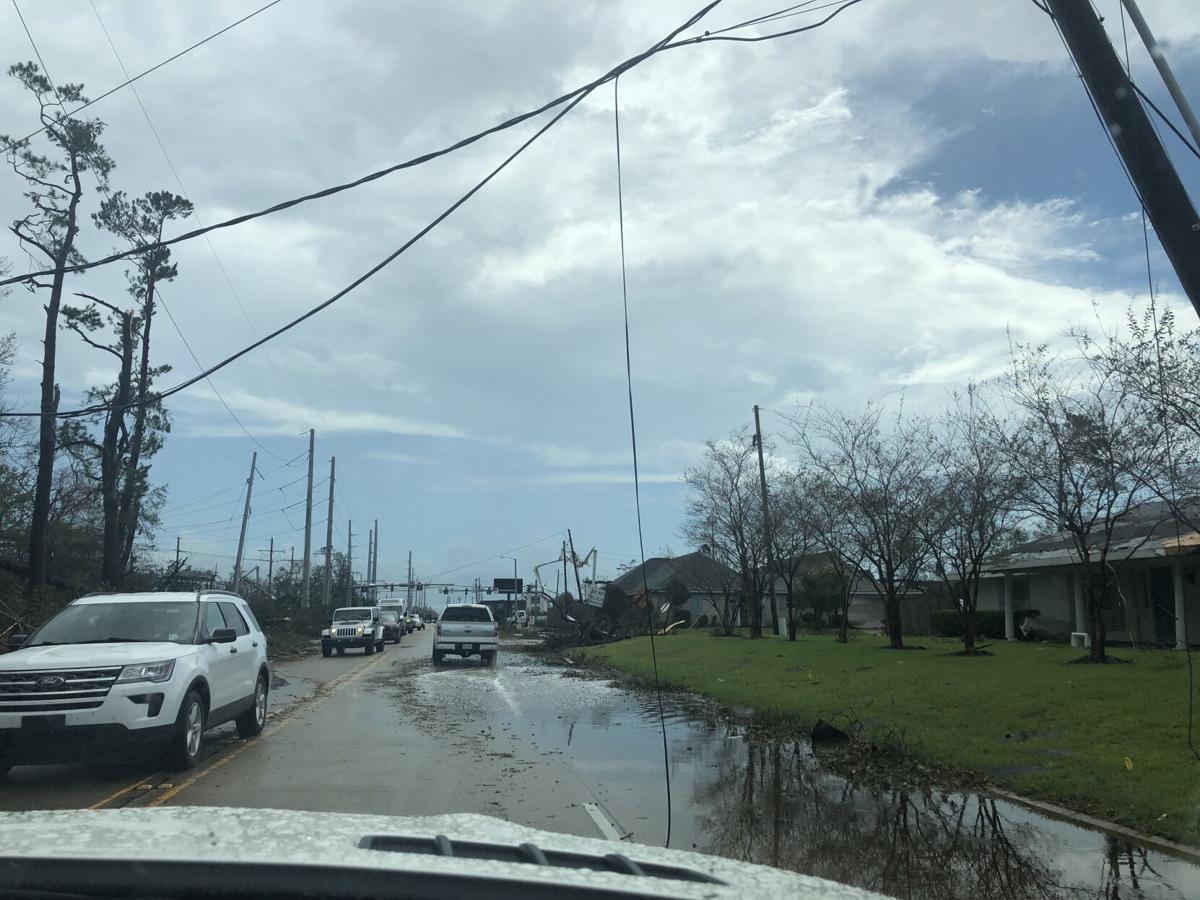 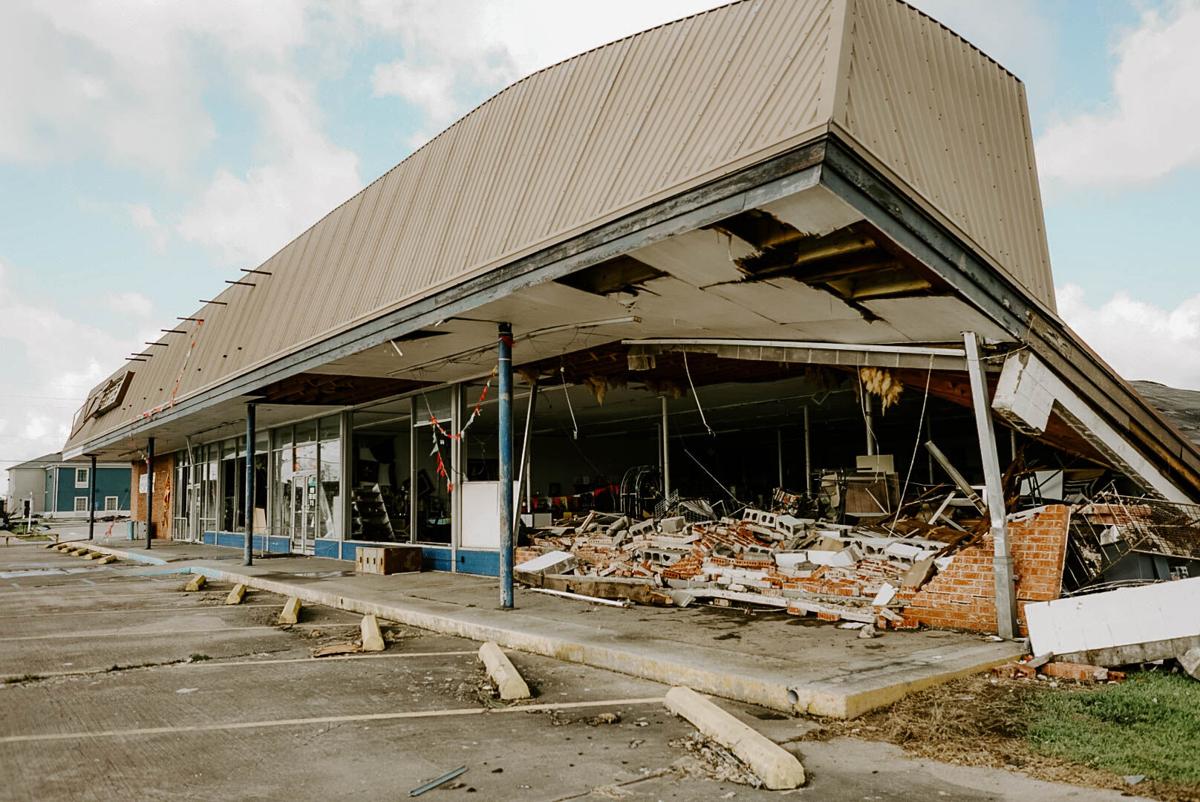 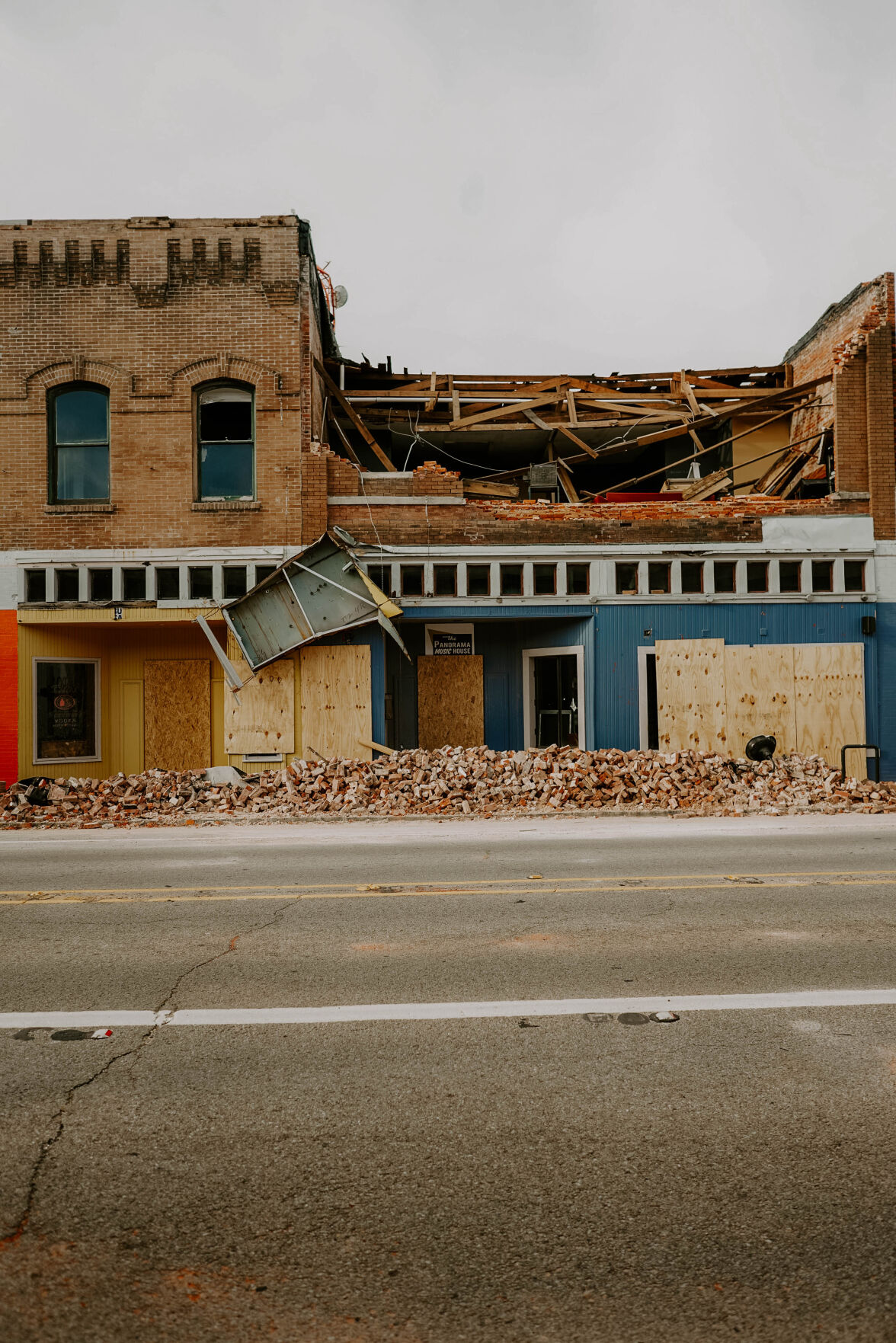 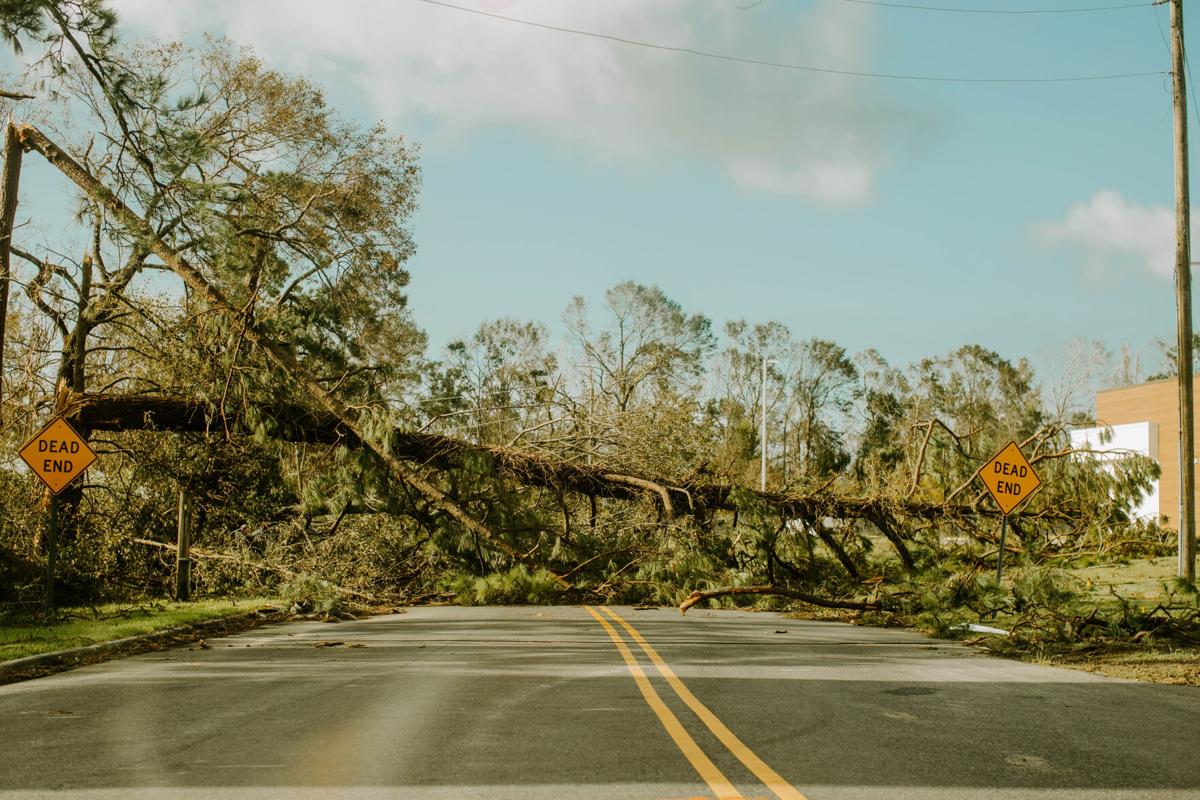 Engel captured a large tree blocking a road in SWLA. 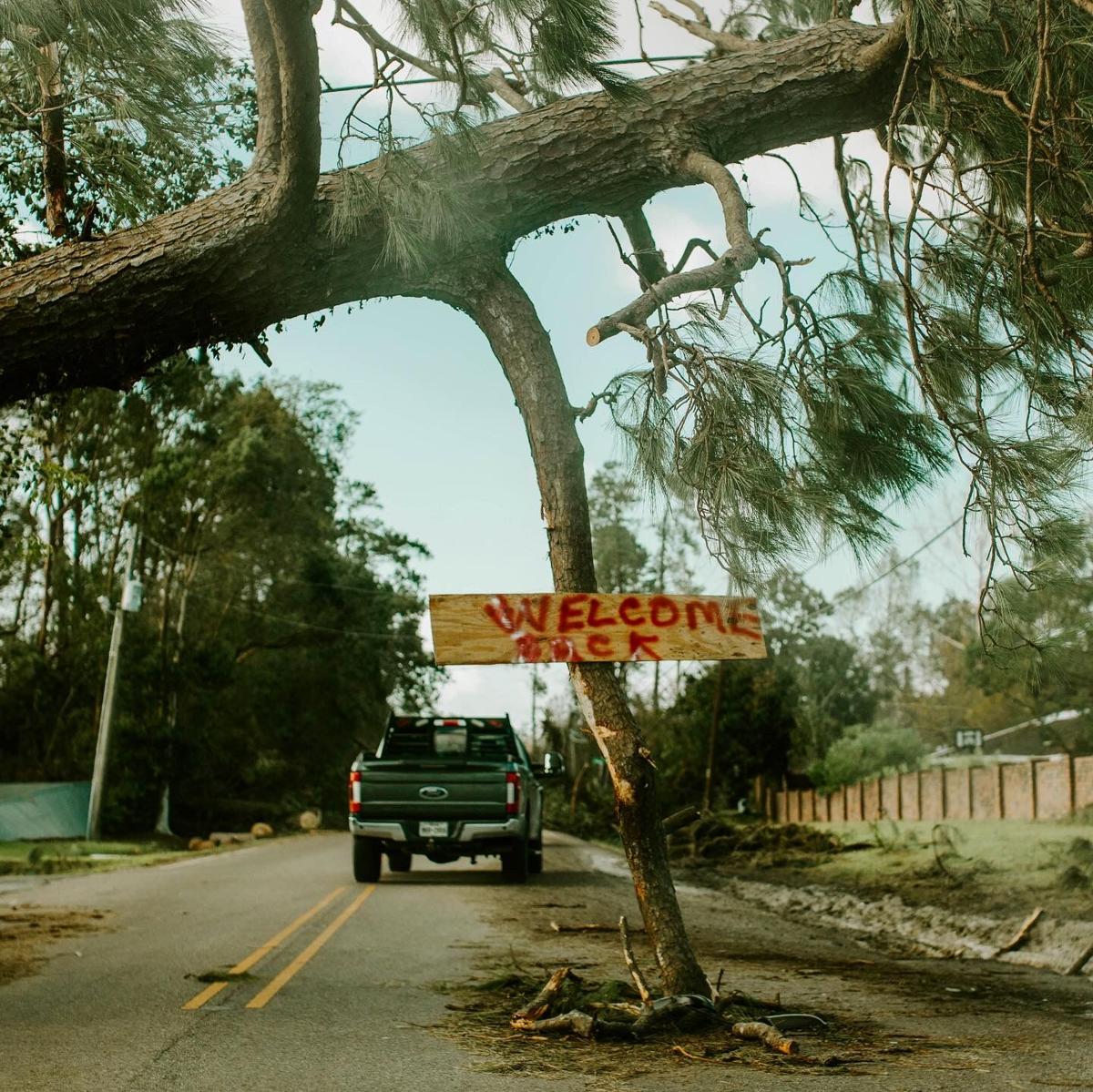 Engel captured a unique tree and board in the road, reading "Welcome back." 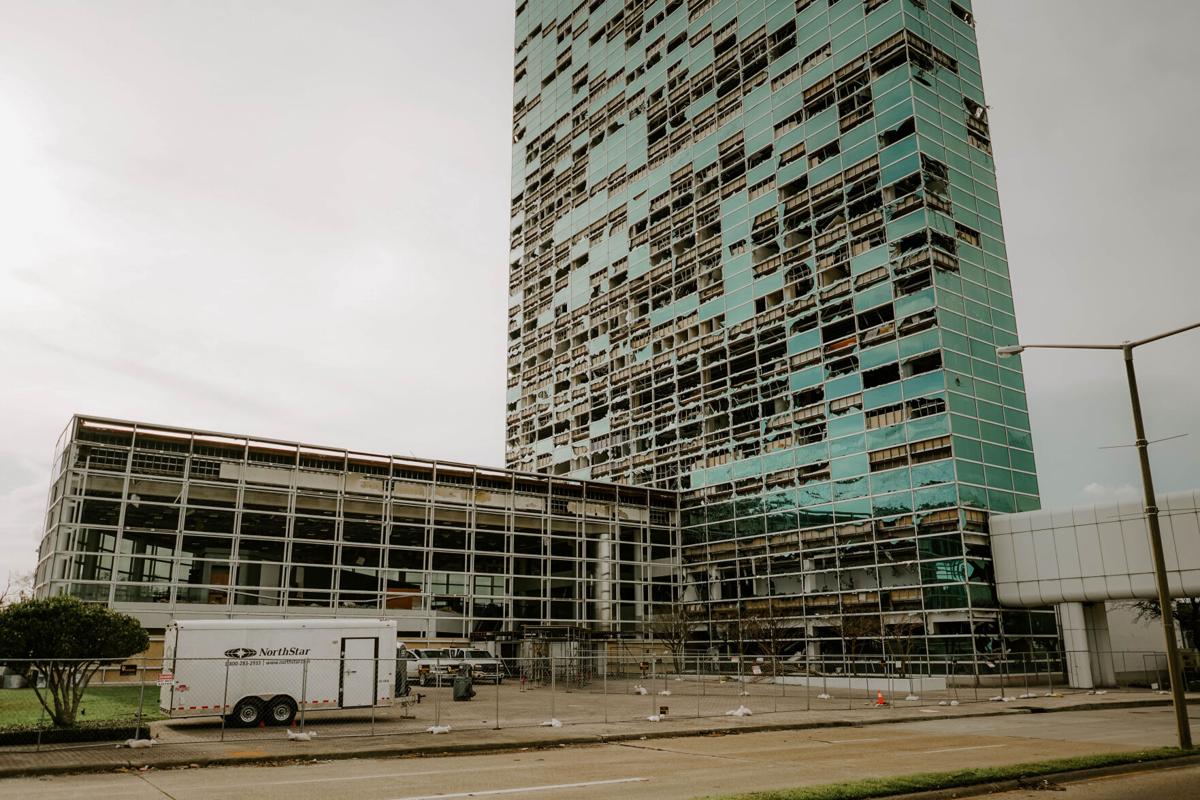 Photographer Collin Brown captured the destruction of the Lake Charles Capitol One skyscraper.

As LSU Sophomore and Lake Charles resident, Colin Schram, drove to his demolished hometown for the first time since Hurricane Laura pummeled Southwest Louisiana, he noticed a pungent smell.

“It smells like pine,” Schram said. “Right when you get into Welsh, you can smell the trees that snapped.”

A normal two-hour drive home became a trek to his devastated city. As Schram entered Lake Charles, he noticed that stop signs were blown away and the gas station where he used to get gas every week did not exist anymore.

He spent the weekend helping his family fix his house which sustained damages in almost every room. But, as the school week began, Schram left his family and distraught hometown to attend his classes at LSU.

“Me, personally, being here makes me feel like I am not doing anything for my family in Lake Charles,” said Schram.

LSU Sophomore and Lake Charles resident, Gabby Phillips, said a few weeks ago she remembered visiting with her family on the couch in her living room, expressing her excitement for her sophomore year at LSU even with COVID-19 inconveniences.

“Starting this school year was already difficult,” said Phillips. “I loved knowing I had a home to go back to so that I could get away from the craziness a new school year brings.”

A week later, she was picking up debris scattered in her backyard.

“Now, my home is unlivable,” said Phillips. “My home is in pretty bad shape, but I had to keep telling myself that it could be worse.”

Other LSU students from the Southwest Louisiana area are struggling with the reality that they do not have a place to go home to and are feeling little support by their only home at the moment, LSU.

LSU Junior and SWLA resident, Erin Troendle, said that the aftermath of her hometown is unprecedented and catastrophic.

“My home didn’t have nearly as much damage as most,” said Troendle. “That says a lot because my house will be uninhabitable for the foreseeable future. I consider myself lucky to even have a house.”

Meredith Owen, LSU Sophomore and Lake Charles resident, said that, while her house sustained unlivable damages, some of her friends’ houses are in shambles.

“Our stuff will eventually be OK, but a lot of my friends’ houses are like gone,” said Owen.

While LSU Lake Charles students are two hours from their devastated hometown, tackling a new school year, adjusting to COVID-19 mitigations and, now, mourning the devastation of their homes, some students feel overwhelmed with little compassion and help from the university and administration.

“If I’m being honest, I am extremely overwhelmed trying to juggle classes and being present for my family and hometown,” said Troendle.

LSU President Thomas Galligan emailed the student body the day Hurricane Laura made landfall, expressing the university's thoughts and prayers for the victims affected by the “devastating storm” and listing resources for students such as the Student Health Center, Emergency Relief Fund and LSU Food Pantry.

Some SWLA students think that an email is not enough.

“LSU did the bare minimum by sending an email about how to handle the devastation while here at LSU,” said Phillips. “LSU says it’s here to support you. Where? I can apply for food. OK, how is that helping clear the trees on the roads in Lake Charles? I can go to the Bursar Office to tell them I can’t pay my fee bill because my house was destroyed. OK, how is that helping my family get a new roof?”

LSU Junior and Lake Charles resident, Abbie Grace Milligan, voiced her concerns via Twitter. In reply to Galligan’s tweet concerning the university's thoughts and prayers, Milligan stated, “If it had been students from NOLA or BR, would it have been more beneficial to your agenda to actually help them?”

Milligan said that she believes the university could do more to help victims and the Lake Charles community.

“As the Lake Charles community as a whole, they did nothing,” said Milligan. “Thoughts and prayers during this time is not enough at all. That is what you say when you can’t do anything about it, but, in this instance, they could.”

According to a CNN report, during the aftermath of Hurricane Katrina, LSU housed over 2,000 displaced students from universities affected in the New Orleans area, sheltered evacuees in a nearby field house and opened a temporary hospital for injured evacuees in the PMAC.

McNeese State University in Lake Charles sustained severe damages to many buildings on campus, and officials are unsure when or if students will be able to return to campus.

McNeese announced that residential housing is their main priority for students and that the University of Lafayette and Southeastern University have offered temporary housing for displaced McNeese students.

“I would like to see funds being raised or rebuilding,” said Troendle. “I feel Lake Charles deserves this kind of support from our Baton Rouge people as we saw from the entire state during Katrina and Rita.”

Phillips said she would like to see LSU bring students and volunteers to Southwest Louisiana to help with manual labor and clearing debris.

Owen believes that the university could inform students of how extreme the damages of Lake Charles are.

“I personally am very aggravated that no one knows about it all, or people know and they don’t realize how bad it is,” said Owen. “LSU could have been like, ‘hey, a bunch of our students are suffering right now, and here are ways to help.”

Milligan also thought LSU could have offered housing to students taking classes from home in Lake Charles, worked with students to help their families find housing while they are evacuated, fed students or helped the McNeese community.

“What they could have done verses what they did is an enormous list,” said Milligan.

Some students feel an emotional offense to LSU’s response.

“LSU has a much bigger voice than an individual student,” said Phillips. “We chose LSU, and, right now, it feels like LSU has not chosen us.”

Milligan also feels frustrated with the amount of help LSU is offering victims.

“It’s extremely and incredibly disappointing and infuriating that a university that we care so much about and we thought cared so much about us is doing less or nothing at all about something that pretty much everyone else in Baton Rouge, at this point, has taken steps to help Lake Charles,” said Milligan. “LSU will not utter a single word about it other than, ‘We have this relief fund for you that you probably won’t even get.’”

LSU tweeted Sept. 2 a link to donate to the Emergency Relief Fund for students affected by the hurricane.

The Emergency Relief Fund is designed to help students financially when battling emergency or financial hardships. Students must apply and provide documentation of bills and repair expenses to receive benefits of $750 maximum.

Some LSU SWLA residents do feel support from the university. LSU Student Government President and SWLA resident, Stone Cox, said he felt very thankful that he did not need assistance from LSU during this time.

“I think LSU is really trying their hardest to support our SWLA students during this time,” said Cox.

Students said they were thankful that classes were canceled the Wednesday and Thursday during the storm so that they could be with their family and grieve the misfortune of their hometown. However, Southwest Louisiana is expected to endure many months of restoration.

“You really can’t see it unless you are actually in the city and see how bad it is” Schram said. "Everybody is affected.”

LSU SWLA students are thankful for LSU Athletics, LSU Greek Life and other student organizations for their efforts to help the Lake Charles community affected by Hurricane Laura.

“I am proud of the Greek organizations and other student organizations for taking the storm seriously and being proactive in gathering supplies,” said Troendle.

Some LSU Lake Charles students are also agitated that the devastation of the Lake Charles area is not receiving attention and support nationally as well.

Troendle believes that the reason the tragedy in Lake Charles only appeared in a 24-hour news cycle stems from its small-town stereotype.

“Lake Charles is extremely small compared to other areas that have been hit by these catastrophic hurricanes,” said Troendle.

However, Calcasieu Parish is home to about 50 industrial factories encompassing petrochemical plants, energy plants, oil and gas refineries and other industries.

Lake Charles is also home to three casinos which amassed about $900 million in 2018 according to a KPLC-TV special report.

Lake Charles may be the fifth largest city in Louisiana, but, according to the SWLA Economic Development Alliance Report, it ranked as the fastest growing metropolitan statistical area in the state and one of the fastest growing cities in the nation.

“I just don’t think Louisiana or the country knows what Lake Charles does in terms of oil and gas,” said Milligan. “Since we are not a major city, no one cares.”

In the midst of reconstruction and grief, Lake Charles students have felt comforted by the thoughtfulness of their friends.

“I feel an overwhelming outpour of generosity and support from my peers which makes navigating these hard times a little easier,” said Troendle.

Phillips said that her friends have also been a major support during this time.

“A simple text goes a long way,” said Phillips. “I have friends offering to cook for me and even drive with me to Lake Charles to move things out of my house.”

Owen felt reassured by the strength of the Lake Charles community.

“You can see how strong of a community we are in times like this because we are all very frustrated about how we are not getting heard, but we are not frustrated with each other,” said Owen.

For now, Lake Charles students ask the LSU community to donate supplies and money, spread the word of the disaster through social media platforms and stay informed about what the area needs.

“Just by donating $5.00 to an organization or a few cans of food, you are doing so much for a family who has been depleted of everything,” said Troendle.

Some students, such as Phillips and Schram, believe that the community needs physical help and labor to bring the city back to life.

“I feel like there should be more of an incentive to get more people on-site to help,” said Schram. “There is a lot to be done in Lake Charles.”

While Phillips knows her hometown is small, she said that she hopes the tragedy and destruction of the area will not get overlooked.

“Don’t forget about us little people in L.C.” said Phillips.